Days in the Bottom of My Kitchen 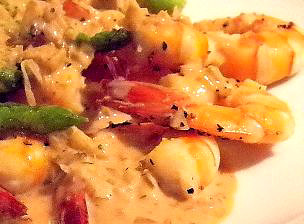 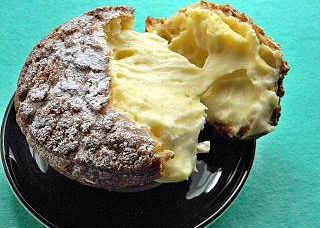 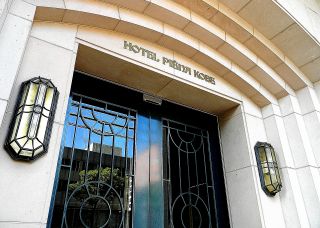 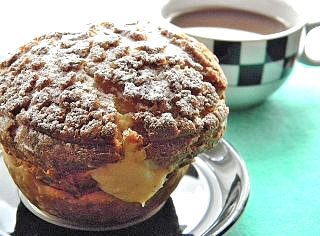 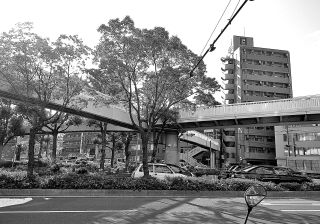 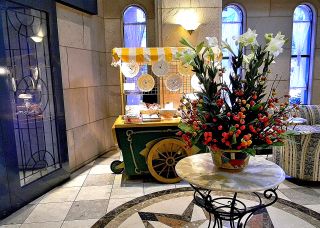 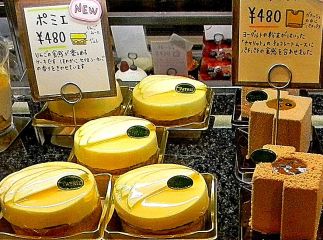 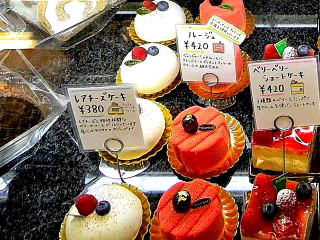 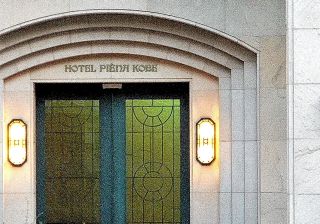 (⇒ Japanese Recipe / 日本語のレシピ) (⇒ List of Recipes)
This is the recipe for spicy "Asazuke", Japanese-style lightly-pickled cucumber. Most asazuke pickels can be "quickly 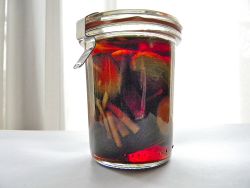 and easily" made, but my recipe is not a very quick nor easy one (please don't be discouraged...). In most cases, asazuke is supposed to be prepared maybe within an hour, but this recipe will need more than 6 hours and one night! I make asazuke this way in order to make them storable for more than two weeks (most asazuke pickles are supposed to be eaten within a few days). Like other "Tsukemono" (Japanese style pickles), Asazuke goes great with beer or cold sake!


Directions
[1] Wash cucumber well with running water, cut into bite sizes and place them neatly in a heat resistant container.

[2] Boil 12-15% salted water, pour over the cumcumber, place something heavy (like a weight stone) on them and let rest for 3 to 4 hours.

[5] Combine the ingredients [A] in a small saucepan, bring to a boil, stop heat and add sesame oil.

[6] Wash the cucumber well with running water until it tastes "good" (meaning "not too salty"). Boil the cucumber for 2 to 3 minutes.

[7] Put the cucumber in jars nicely, place red chili peppers and sliced ginger on top of them, pour the liquid prepared in the step [5] and sterilize in the following method. (If you are not going to sterilize them, eat them up within a few days) 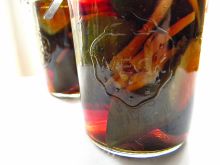 [8] Wipe rims and twist on lids very lightly. Place in a boiling water canner, a steamer or a pot of a boiling water and process (steam) for 15 minutes. Remove jars, twist on lids very tightly, return jars to the pot, and simmer for another five minutes. Remove jars from the pot, place them upside down, let cool for 30 minutes and wash them with running water. Let rest in the refrigerator overnight before eating. Garnish with roasted sesame when eating. Eat within a week once opened. Can be stored in the refrigerator for 2 to 3 weeks unopened. 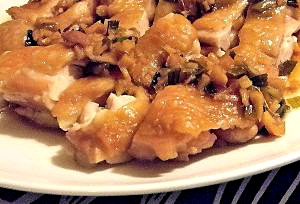 I believe I don't need any explanation for TERIYAKI chicken! It is one of the most famous and popular Japanese dishes in the world! But my recipe is slightly (or very?) different from traditional ones. Like I did in my last recipe for ruby snapper fish, I use plenty of garlic, scallion and ginger. So maybe this should not be called "TERIYAKI"... Anyway, the original recipe has been handed down from my mother to me, and this has always been the "TERIYAKI" for me and, believe me, no other teriyaki has tasted better than my home-style teriyaki chicken!


Directions
[1] Chop garlic, ginger and scallion into small pieces and combine with the ingregients [A] (sugar, soy sauce and sake).

[2] Place chicken in a deep plate, add the sauce and let rest for about 10 minutes. 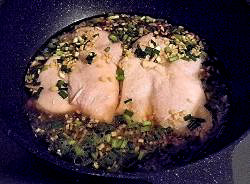 [3] Put a very small amount of vegetable oil in a wok and warm over medium heat, add chicken first, skin side up, then the sauce, and set heat to high. Reduce heat to low as soon as it comes to a boil and simmer for 7 to 10 minutes, covered.

[4] Turn the chicken, set heat to high for just 10 seconds, reduce heat to low again and simmer for about 7 minutes, covered.

[5] Uncover the wok and simmer over medium to high heat until the sauce is boiled down to 1/2 or 1/3. Cut and place the chicken on a plate, garnish with the cooked garlic-ginger-scallion sauce and enjoy!

THANK YOU For Stopping By!
Has Been Visited By :
Now Being Viewed By :